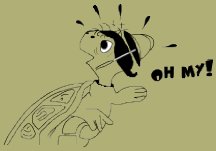 Yes, You Can Fly with a Trike

Every one has heard cycle tourists recount frustrating details while describing the horrors of getting their bicycle on an airplane. Flying with a bicycle is not only stressful but requires going through lots of hoops. Bicycles can't fly unless they are packed in a special bike box which means making many calls to bike shops all over town. The handlebars have to be turned, wheels and pedals removed and there are maximum weight requirements. After figuring it all out and getting the unwieldy box to the airport check-in, there is an added insult of extra fees. Sometimes over $100 per bike. This sure doesn't sound like much fun and almost makes you want to cancel your trip before you've begun.

I gets lots of questions about how I fly with my trike. I've been doing this for 7 years and it couldn't be easier. I don't put Myrtle in a box and I'm rarely charged an extra fee. Sounds better doesn't it? Whenever I explain how I do this, I always get unconvinced looks followed by many more questions. It's as if no one wants to believe me. Or they think, somehow, I'm the only one that is 'getting away' with it. Since I started flying with my trike, a few other adventurous trikers have followed my lead and they, too, are flying their trikes all over the world.

It was Ian Sims, the owner of Greenspeed, who told me he flies with his trike. In fact, he and his wife have even flown with their tandem trike. Again, no box and no extra fees. A tandem trike? I figured it was before 9/11 and he couldn't possibly still be able to pull that off. But, I was willing to give it a try. On my first tour in 2007, I rode from Canada to Guatemala and didn't even entertain the possibility of putting my trike on a plane for the return trip home. I took Myrtle apart, boxed her up and mailed her to Portland by DHL. That shipment cost me $700. Ouch is right!

My next tour started in New Zealand. I probably called Air New Zealand half a dozen times asking, again,for confirmation they would take my trike. Every time, the answer was the same, 'No worries, mate'. I was a nervous wreck waiting for my turn at check-in. I met lots of people who were interested in what I was rolling to the counter. I even got names and addresses of people to stay with on the north island. Amazingly, check-in was a breeze. They took the trike no questions asked or extra fees. Wow! I couldn't believe it. I settled into my seat, had a great flight and a fantastic tour that also included 6 months in Australia. I flew 4 times on that tour and every time I had the same easy experience.

Over the last 7 years of touring, I have been on countless flights and numerous airlines. Cathay Pacific, Singapore, Tiger, United, American, Delta, KLM, Air Iberia, Air Canada, Malaysia, Turkish, Bangkok, Aer Lingus, Lufthansa, China Airlines, Eva, Thai Airways, US Air and all of them have been more than accommodating. The only airline that has refused the trike is Southwest. This was especially disappointing since I had called customer service and gotten the A-ok. Instead of panicking, I went to the next counter. Alaska Air took the trike, no problem, and got me home even faster at a cheaper price. Alaska now has a customer for life. After that experience, I no longer call ahead for permission. It was clear that customer service had no idea what a trike is or what I was asking.

I have never been charged on international flights. On domestic flights I am charged as if I'm carrying an extra bag. The highest fee has been $60. Alaska charges $50. 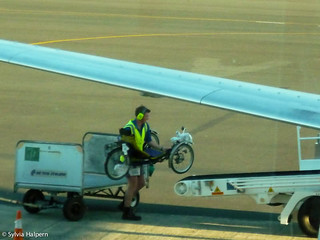 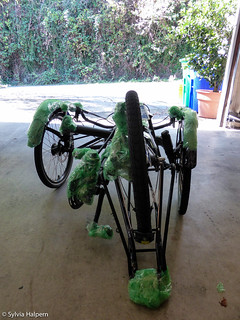 Scorpion prepared for flight to Europe.

Here is the evolution and method I use to prepare my trike for flight:

My first trike was a Greenspeed GTO that didn't fold. The airlines never cared how long it was. Once, the front wheels were measured and I don't know what the max width is but 33 inches was fine. For this trike, I would remove the mirrors and lower the handlebars. The chain would be dropped off the rings, and using zip-ties, attached to the frame to keep it from sagging. Then the chain rings and derailluer are covered with bubble wrap. It is also suggested to remove some air from the tires. That's all you really need to do but I also add bubble wrap on top of the fenders and around anything that could get banged like my rear light. The airlines like seeing the bubble wrap too. All my gear (panniers, shoes, helmet) go into a separate box. On most international flights you are allowed 2 50 lb boxes and these 2 pieces fall under those requirements. And, very important, I always get to the airport extra early; before the check-in people are stressed out by all the other passenger requests for the flight.

I'm now touring with a folding trike, an HP Scorpion fs. In order to fold it, I have to remove the seat. After it is folded I do exactly the same as I did with my Greenspeed. I put the seat, which comes apart in 2 pieces, into the box with my gear.

On my last flight home from Turkey, I tried a new method which I found so successful, I'll be following this protocol in the future. Instead of taking the seat apart to get it in the box with my gear, I attached it to the folded trike using bungy cords. Then I strapped my 2 panniers together checking them on the plane as one piece. The rear rack bag was filled with electronics and fragile items which I took as carry-on. With this method, I eliminated the box and now have the option of riding to the airport. All I need is some tape and bubble wrap.

What is it that makes flying with a bicycle so daunting and a trike so easy? I can only speculate, but, I think the airlines are sensitive to anyone who could be disabled. I don't walk funny to the counter or do anything to plant the idea but my sense is the check-in people assume a disability for why I'm flying with the trike. You have probably been asked about a disability, maybe a bad back when you are out riding? Well, the airlines can't ask. It's against the law to ask about any disability. If the counter people ask what the trike is called, I do say 'it's a mobility device'. Which is true - wink wink. And, it's also true that many people ride trikes because of a disability. On a couple of flights I added a disabled placard I found at a hardware store. Not to play up the idea of being disabled but to encourage the luggage guys to be gentle. On the second flight, the trike came out to baggage claim upside down and I realized the guys probably never saw the placard. So much for that idea. In fact, once I thought about it, adding the placard was a dumb idea and there really isn't any reason to try this. I have never had any damage to my trike on a flight and the luggage guys really do a great job.

Take a look at the pictures to see how I prepare the trike for flights. Hopefully, this will make it clearer and, maybe, encourage you to take an adventure to a far off land. 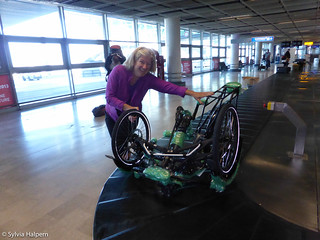 Getting Myrtle off the carousel in France. 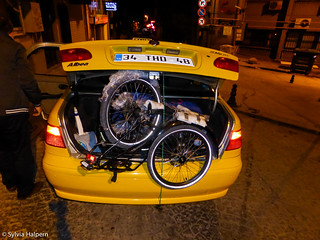